Ashley Campbell - "The Lonely One" 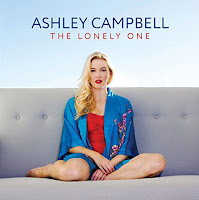 Due for release on 9th March, The Lonely One marks country singer-songwriter Ashley Campbell's debut solo release. Having co-written each of the thirteen tracks, the album channels Ashley's distinctive tone and sound to create an intriguing overall package.

Whilst the distinctive style of the album might not appeal to every listener there are a few tracks here that really shine. I Wish I Wanted To, for instance, oozes an emotive delicacy that seems to suit Ashley really well. The harmonies are a real high-point in a bittersweet song that encourages you to just sit back and take it all in. The musicians should be applauded throughout the album as a whole but in particular with this track, the production creating a perfect backdrop to Ashley's vocal, undoubtedly an impressive moment from start to finish.

Album closer Nothing Day is another stand-out moment. The overall instrumentalisation and the lyrics themselves combine surprisingly well with the various weather effects to paint a really clear picture. A sweet track that will surely be relatable to a lot of listeners, Nothing Day seems to act as a perfect closing song for a generally strong album, arguing the point that songs of this tempo and instrumentalisation are where Ashley is at her strongest.

Unfortunately there are also some songs here that aren't so strong, one of which being Cry. I was initially intrigued by the steampunk, work-song styling of the track but it ultimately feels a little uncomfortable. Ashley's vocal actually feels a little strained in the chorus and the highly repetitive lyric becomes a little grating fairly quickly. Compared to the other lyrics on this album, Cry feels a little questionable and certainly not up to the standard of a lot of the other tracks.

I like the premise of Better Boyfriend but it just feels like it misses the mark slightly. I remember Ashley performing the track at her last appearance at C2C Festival and quite liked the more stripped back version that was on offer then but the overall production choices that have been made mean that the song has become a little pedestrian and could have ultimately been a lot more in my opinion.

Generally, whilst certainly an album for fans of the more traditional side of country music, The Lonely One is a very strong release. The musicianship should be applauded and the album generally showcases who Ashley is as an artist well. Set to head over to UK in the next few days to play some shows surrounding this year's C2C Festival, I am sure Ashley will be warmly received and she is certainly an artist I will continue to follow as she develops.
Email Post
Labels: Ashley Campbell "The Lonely One"