Luke Combs - "This One's For You Too" 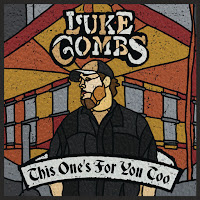 Released on June 1st, Luke Combs' This One's for You Too is, at it's core, a re-release of 2017's This One's For You alongside five additional tracks to commemorate the album's one year anniversary. A frustrating release for fans of Luke's who have already bought his previous release however, with these five new songs arguably sitting more comfortably within a brand new release.

The strongest track from the new additions is undoubtedly A Long Way. Built around a solid guitar and drum line, A Long Way wraps the listener up in a distinctly compelling listening experience. Luke's vocal sits comfortably within the relatively rocky production of the track, with the levels complementing his distinctive tone and creating a relatable song that I am sure will become a favourite of a lot of listeners.

Houston, We Got A Problem is another compelling song. The chorus in particular has a distinctly 'singable' quality which I'm sure will make it a popular addition to any live set. Fitting smoothly alongside the rest of the tracks on the album, Houston, We Got A Problem merges a soft rock influence with more typical country styling and ultimately delivers a story-driven song that, once again, suits Luke very well.

The lyrics behind Lonely One are what really makes the song a valuable addition to [both releases of] this album. The bittersweet sentiment is grounded by another soft-rock influenced production that allows Luke to deliver a heartfelt vocal and easily control the ebb and flow of the track.

Whilst this is generally a strong album there is disappointingly nothing here that has really blown me away. If you already have This One's For You I'd unfortunately suggest listening to the new tracks and downloading those you find yourself drawn to rather than re-purchasing the whole album. If, however, you have yet to own any of Luke's music this serves as a strong introduction and is certainly worth a listen. Ultimately, This One's For You Too is probably not an album I will regularly return to but I'm interested to hear how Luke progresses with future releases.
Email Post
Labels: Luke Combs "This One's For You Too"