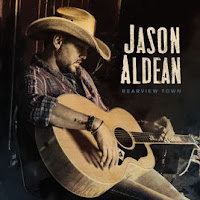 Released on April 13th 2018, Rearview Town is the eighth studio album from Jason Aldean. I have never been a particularly big fan of Jason's (in fact I'd go as far as to say he's one of least favourite male country singers) so was mildly intrigued to hear what this album contained when the opportunity presented itself to have a listen.

I was, however, pleasantly surprised upon hearing Drowns The Whiskey in particular. The newest single from the album, Jason's distinctive tone commands the track alongside an appearance from Miranda Lambert - with the duo's voices blending very well.

The album's title track does Jason's distinctive tone no favours. The opening instrumental introduction has a compelling brooding feel but ultimate the track is drowned by excessive production and a vocal that simply doesn't feel comfortable. It certainly doesn't feel like this is the strongest choice as a title track.

The title of Better At Being Who I Am promises more than the track ultimately delivers. Oddly there are quite a few moments where it feels like considerably more words have been squeezed in than actually fit comfortably against the melody. The overall feel of the track feels a little pedestrian, especially when compared to some of the ballads some of Jason's contemporaries have recently released.

Unfortunately, whilst I certainly appreciate Drowns The Whiskey, Rearview Town as an entire package does little to make me a fan of Jason Aldean's. I am sure there will be many people who gravitate towards this album but it's not one of me.
Email Post
Labels: Jason Aldean "Rearview Town"