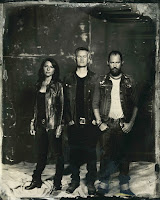 Released on 24th August, Chains Are Broken is Americana trio The Devil Makes Three six full-length album. The brooding album artwork and song titles immediately paint a clear picture of what listeners can expect from the overall sound of this album, something that I ultimately found a little underwhelming.

The album's title track also falls as the opening number of the release. Unfortunately it feels as though there is little within the song to really wow listeners. The vocals struggle to truly blend with the steampunk-esque instrumental style and disappointingly feel a little uncomfortably drone-like at points.

All Is Quiet is (considerably) the longest track on the album at 5 minutes 4 seconds. Having opened with a substantial instrumental introduction, the song then seems to have only minimal progression, making it ultimately quite boring for a listener. The interweaving instrumental lines are largely compelling however there's unfortunately not really enough to keep a listener coming back for more.

The same can, disappointingly, be said of album closer Curtains Rise. Once again the instrumentalisation is appealing however the overall track does the vocals no favour and ultimately leaves a largely forgettable moment within the album.

Unfortunately there is little through Chains Are Broken to really draw listeners in. A distinctly average album from start to finish that, in my opinion, would need considerable work for the release to really shine.
Email Post
Labels: The Devil Makes Three "Chains Are Broken"