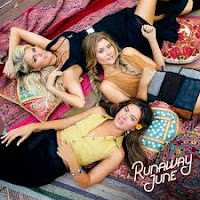 I immediately found myself drawn to two songs in particular here, Buy My Own Drinks and Wild West (interestingly the only two songs on the EP co-written by one or all of the trio). The gutsy, gritty Buy My Own Drinks opens the EP and offers a distinctly compelling introduction to the trio if you have yet to hear their music. An empowering lyric combined with a catchy instrumentalisation, Buy My Own Drinks offers an impressive package that undoubtedly showcases Runaway June strongly.

The softer of the two, Wild West is, at it's core, a more traditional love song. It is here where the trio's harmonies really shine, with the chorus in particularly highlighting an emotive vocal delivery from each of the trio. Grounded by a touching lyric, the softness of the track offers another dynamic within the EP and sits comfortably as the closing track, urging listeners to keep returning.

Dwight Yoakam's Fast As You isn't an instantly recognisable track to me but, it was certainly interesting to see it's inclusion here. Runaway June have already been compared to the Dixie Chicks and the comparison is probably at it's closest here. I wouldn't say this is a poor inclusion on the EP as the various parts of the song do work well but, equally, it does feel like this lacks something compared to the other tracks on the EP, possibly not helped by the overall production and tempo choices.

This EP undoubtedly marks Runaway June as a group to be reckoned with (and comes after their first ACM nomination earlier this year!). I am certainly intrigued to see where future releases take them and would suggest everyone keep an eye on this talented trio!
Email Post
Labels: Runaway June "Runaway June EP"