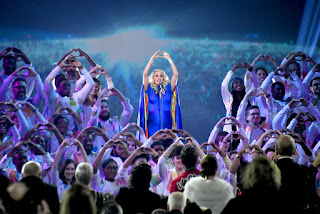 The CMA Awards are over for another year....read on for a round up of the show and my thoughts on the performances and award winners


As with previous years, the awards for Musical Event, Video and Musician were announced earlier in the day which meant that the first award announced during the show itself was for Song Of The Year. With a couple of intriguing winners and one big surprise this year's show showcased some of the very best in country music.

Whilst you may not agree with all the winners you have to still congratulate them - and all the nominees generally - on their hard work this year and the music they have all contributed to the genre. The biggest surprise of the night is certainly Keith Urban's Entertainer Of The Year win. An incredibly deserving artist, the win marks Keith's first Entertainer win in thirteen years and you could clearly see how surprised both he and wife Nicole Kidman were. A very humble acceptance speech followed which rounded out the night well. Thrilled for him!

Performances
Whilst some performances were more successful than others there were a few that stood out for me: Dan + Shay, Kelsea Ballerini, Carrie Underwood, Brett Young, Keith Urban, Garth Brooks and Eric Church. The stunning debut of Garth Brooks' brand new track Stronger Than Me was truly one of the highlights of the night and had most people (including wife Trisha Yearwood) very emotional. Dedicated to his wife and not heard by anybody before tonight it was really touching and showed that Garth can deliver a really great performance with just him and a guitar.

Dan + Shay delivered the strongest performance of the night up to that particular point. The underrated duo have had a very strong year and didn't disappoint with a very impressive rendition of their hit Tequila which certainly made people sit up and take notice! Social networks were also full of support for their performance, it was great to see them really shine. Kelsea Ballerini seems to continuously deliver strong performances on the CMA stage and this year was no exception, offering up a compelling performance of latest single Miss Me More - my only negative was that the dancers ultimately felt a little unnecessarily distracting. Having not followed Brett Young particularly closely previously his rendition of Mercy was a pleasant surprise, it was just a shame it was cut short to link to the radio winners!

The final performance of the night fell to Eric Church and the title track of his new album. Completely faultless, Eric sailed through the track and also interacted really well with his band and backing singer Joanna Cotten. Carrie Underwood and Keith Urban rounded out the best performances of the night with an incredibly emotive performance of Love Wins and a high-energy compelling performance of Never Comin' Down respectively.

There were various collaborations throughout the night, the strongest of which being Ricky Skaggs' medley and Dierks Bentley & Brothers Osborne's Burning Man. Whilst you may not like Bluegrass music, Ricky Skaggs and his band Kentucky Thunder can certainly play their instruments. Alongside some of country music's other brilliant players, the medley was certainly an impressive moment within the show and a fitting tribute to Ricky himself. Dierks Bentley's distinctive voice controlled a track that felt completely comfortable for him in Burning Man. Whilst Brothers Osborne didn't sound quite as comfortable as Dierks, the trio's voices still blended well and the performance as a whole was really successful.

It is beginning to feel like the CMA Awards wouldn't be the same without Brad and Carrie hosting. Hosting their 11th show, the duo still seem completely at home, with jokes ranging from 'Chicken Little Big Town' to 'A Star is Bored' to 'Whiskey Lullaby bar and day-care centre', the duo continue to interact well and make their audience laugh. Hearkening back to Brad's 'accidental' reveal of the sex of her first baby - and seemingly after some persuading - Carrie also revealed during the duo's opening that she is having another boy!

The moment of silence at the beginning of the show for the Borderline shooting victims was a fittingly sweet tribute. Thank you to everyone involved with tonight's show, yet again it was another show highlighting some of the best artists within country music.There will surely always be things I would change to favour particular artists and songs but the show delivered three hours of generally very impressive performances and worthy award winners which I thoroughly enjoyed. Let's do it all again next year!
Email Post