It's that time of year again! Read on for my top five albums of this year, let me know your thoughts! 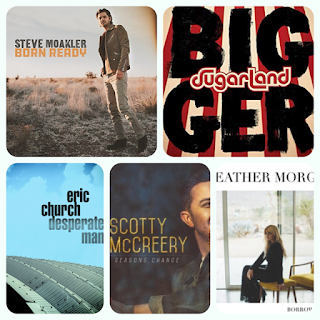 Arguably currently better known as a song-writer, Borrowed Heart is Heather Morgan's first album. Full of intriguing promise from when it was first announced, the first finished album doesn't disappoint. A welcome addition to this year's string of album releases, Heather Morgan has undoubtedly made a name for herself as a talented solo artist with the release of Borrowed Heart.

Building upon his 'rootsier' side with his latest release, Desperate Man sees another impressive release from Eric Church. Whilst when I first listened to the album I found myself not particular drawn in, I have found myself warming to the release the more I listen, the album liberally scattered with a lot of strong tracks.

With the release of their first album in eight years, Bigger sees the return of Sugarland. A dynamic album that certainly lives up to expectations, Bigger offers a strong selection of tracks that are grounded by Jennifer's distinctive tone and commanding vocal performance alongside great musicianship. The duo's vocals work really well throughout, developing the 'Sugarland' sound.

The curator of what was, in my opinion, 2017's strongest album, Steve Moakler returns with follow up album Born Ready. A very compelling album from start to finish and crafted by a very talented wordsmith, Born Ready welcomes listeners and encourages you to listen again and again. Undoubtedly deserving of a place in any country music fan's collection!

Merry Christmas everyone! A huge thank-you to everyone who has supported me in any way over the past year, see you all in 2019!
Email Post