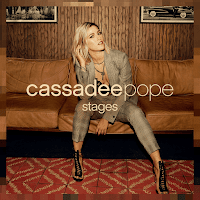 In my opinion that strongest song on the release is album closer I've Been Good. An interesting take on a break-up song, the track offers an endearing vulnerability to Cassadee's vocal and seems to suit her distinctive tone well. One of the softest tracks on the album, I've Been Good offers a strong, solid instrumentalisation which works well alongside Cassadee's vocals without feeling overpowering. Whilst the song is intrinsically sad, it is also strongly compelling, all the aspects coming together to create a very impressive track.

The rocky Bring Me Down Town is a song that just urges you to turn it up loud and sing along. At only two minutes thirty-two seconds long it actually feels a little too short but that also means you want to listen to it time and time again. The track oozes attitude with a gutsy vocal and punchy melody, the electric guitar and heavy drum beat adding an edge and solidifying the overall gutsy feel.


Generally a very strong album, Stages does verge on being a little too poppy for me. I was also looking for a real spark within the release and, whilst I've Been Good comes close, it feels as though unfortunately the album as a whole falls a little short. Despite that Stages is still strong and a solid release from Cassadee but it's probably not an album I'll be returning to regularly.
Email Post
Labels: Cassadee Pope "Stages"