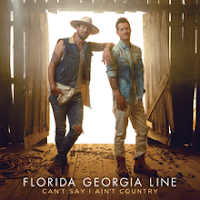 The fourth studio album from Florida Georgia Line, Can't Say I Ain't Country was released on February 15th. Prior to the album's release Simple and Talk You Out Of It were released as the lead and follow-up singles respectively, with the full release coming three years after their last studio album.

Simple is another compelling track which offers a catchy beat and sweet lyrics that compliments Florida Georgia Line's vocals without sounding strained. The melodic lines weave in and out of each other smoothly and are actually arguably the most appealing part of the track with a strong ebb and flow that sets the backdrop for the duo's vocals.

Album closer Blessings is one of the strongest tracks on the album. Florida Georgia Line have a very distinctive sound and will not appeal to all potential listeners however the sweet lyrical message of Blessings is sure to relate. The production is pitched at a perfect accompanying level which fits smoothly alongside the overall feel of the song. An album closer that will certainly leave you coming back for more.

Album opener (and title track) Can't Say I Ain't Country conversely feels a little generic. It has the same overall melodic feel as the duo's smash hit Cruise but lacks the same wide-reaching appeal in my opinion. Whilst it's hard to really ascertain what is missing here as each stand-alone aspect of the track is solid, it is perhaps the combination that falls slightly short - for instance, the production comes across as a little too heavy throughout the track.

Generally Can't Say I Ain't Country is an average album that unfortunately lacks enough to really make it a stand-out release. Florida Georgia Line's distinctive sound will appeal to listeners who are already fans of the duo but it feels as though this release won't have such wide-reaching appeal as some of their other tracks, Cruise and Meant To Be in particular.
Email Post