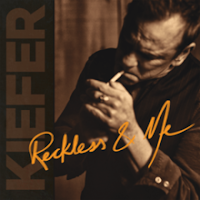 Three years since the release of his debut studio album Down In A Hole, April 26th saw the release of Kiefer Sutherland's sophomore album Reckless & Me. I wasn't particularly drawn to Down In A Hole so originally approached this release cautiously but open listening to a few of the tracks I was instantly incredibly impressed. Kiefer has the perfect tone for this type of music (distinctly more country than his previous, rockier release) and the songs showcase his vocals incredibly well.

Agave is one of the strongest tracks offered here (and arguably one of the rockiest). It sits comfortably alongside the rest of the songs on the album and will undoubtedly leave you tapping your feet along to the infectious rhythm. The musicians are incredibly impressive, each melodic line blending with the others seamlessly and sitting smoothly alongside Kiefer's distinctive vocals rather than becoming overpowering. I'm sure this will be a very popular track live!

Interestingly Faded Pair Of Blue Jeans is one of the only tracks on the album not co-written by Kiefer and is actually my favourite amongst the whole release. Kiefer makes the track feel incredibly personal to him, delivering an emotive vocal that is sure to connect with any listener. A track I could happily listen to time and time again, each part of Faded Pair of Blue Jeans comes together easily to create a distinctly compelling song.

It feels like a very brave choice to close the album with a slow waltz (and the only track solely written by Kiefer) but in this instance Song For A Daughter works incredibly well. The lyrical song is sure to be largely relatable to most listeners and it feels like a perfect album closer. The shortest song on the album, the focus within Song For A Daughter is without a doubt the lyrics themselves and the sweet track will ultimately leave you smiling at the picture it paints.

A bluegrass influenced track is certainly not what you would expect to hear on this particular release but that is what listeners receive in the form of This Is How It's Done and it actually works surprisingly well. It doesn't stand up to the strength of a variety of other songs on the album but it still remains an intriguing addition and is certainly worth a listen!

Reckless & Me is an incredibly strong album and would have a deserved place in any country fan's music collection. I am very excited to be able to see this album performed live later this year and would certainly recommend it to everyone!