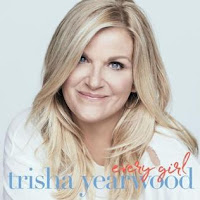 30th August saw the release of country music superstar Trisha Yearwood's first country music studio album since 2007, Every Girl. Containing a myriad of very impressive songs, Trisha once again proves that she remains a force to be reckoned with within the genre.

Find A Way will be instantly recognisable to fans of Lucie Silvas (it features on her 2015 album Letters To Ghosts). With a similar overall feel to Lucie's original, Find A Way interestingly seems to suit Trisha's vocal well and offers an opportunity for her to channel a different dynamic. The catchy guitar line and solid drum beat will undoubtedly leave you tapping your feet along, I can imagine it is a very popular song to hear live! (It is also a nice touch to have backing vocals provided by Lucie).

Home follows on, one of the strongest tracks on the album in my opinion. A soft yet emotive vocal delivery combines with goosebump inducing harmonies to create a very impressive moment in the album that you will certainly want to hear again and again. A distinctly relatable song, Home offers something for everyone, from the soaring vocal to the warm instrumentalisation and everything in between.

Garth Brooks lends his vocal to What Gave Me Away. The bluesy song offers up a dynamic lyrical story and (as usual!) Trisha and Garth's voices blend very well. The production is very strong, with a compelling guitar solo and a smooth horn section adding another side to the song whilst still sitting smoothly alongside the rest of the album. Can't Take Back Goodbye also channels a bluesy feel to the same level of success.

Title track Every Girl In This Town has an anthemic feel similar to that of Martina McBride's This One's For The Girls. Another distinctly lyrical based song, the ebb and flow of the instrumentalisation supports Trisha's vocal and the lyrics themselves, easily keeping the listener's attention. The commanding, emotive feeling behind the track makes it a perfect choice for both the title track and the lead single of the album.

Whilst Trisha has always been a talented story-teller, there is nowhere on this release where this is more evident than in Bible And A .44. A song that you can easily allow yourself to be wrapped up in, the message behind it is incredibly touching and the reminiscent nature of the song will certainly be popular. Without a doubt I hope to see Bible and A .44 become a future single from the release, really impressive.


Trisha Yearwood remains one of the best female voices with country music. Every Girl is a brilliant album, as can arguably be shown by the fact it has given Trisha her highest chart debut ever. I have long been a fan of Trisha's so it is great to see her back with a release this impressive, undoubtedly an album that deserves to be a part of any country music fan's collection.
Email Post